A Day Trip to Cartersville

I recently made a quick day-trip to the town of Cartersville, Georgia, to visit my brother - and of course do a little shooting - and I thought that might make a good topic for my first blog entry.

The downtown area is much like what you would expect to see in any small town across the United States – a town square and a little park, along with several quaint shops and eating joints, and of course a couple of antique galleries. There’s even an old vintage Mustang or two still running around.

But that Coca-Cola sign painted on the Young Brothers Pharmacy wall is a real find. It’s listed on the National Register of Historic Places and is the world’s first outdoor painted-wall advertisement for Coca-Cola – the first EVER. It dates all the way back to 1894, when a Coca-Cola syrup salesman decided to pick up a paintbrush and create it. Right here in downtown Cartersville.

Just off the square is the requisite train depot, which has some distinction in that it’s one of the few original Western and Atlantic railroad depots still in existence; it’s now home to the Cartersville Welcome Center. One of my favorite things to photograph is trains and train tracks, and this one kept me busy for quite a while. It was overcast that day, which made for some really nice kind of "dark and brooding" images.

After you pass through the downtown area, you’ll run into well-kept, sidewalk neighborhoods with beautiful old homes, some dating back to the early 1800s. The azaleas in the spring are nothing short of spectacular. 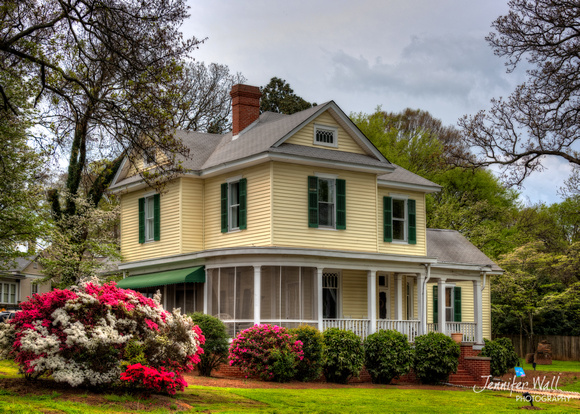 A few blocks further and the rolling farmland takes over, dotted with barns and working silos, and horses and cows grazing in the pastures.

A little further down Mission Road right across from my brother’s subdivision, there’s a beautiful white home set well back off the road, just barely visible if you know where to look. The tree-lined driveway is gorgeous, and just begged me to stop and enjoy the scenery. So of course I did.

I did finally make it to my brother’s house, but he knows me well enough not to ask what took me so long to get there. At least I remembered to bring a gallon of sweet tea.

There’s a lot of beauty - and a lot of history - in old towns all across the United States. I love exploring places like Cartersville – yes, admittedly because there are so many great photo-ops, but something about being in an old town square makes me want to stop and just sit for a while. But not too long – my camera is calling me.

Jennifer Wall Photography
Thanks for the kind words, Jack! My brother has lived there for a number of years, but I learn something new every time I go. And I still feel like i need to pack a lunch for the drive up . . .
Jack Nevitt(non-registered)
don't sell yourself short, Jennifer, your blog is excellent. I've been to cartersville a hundred times and you wrote about things I never knew or noticed. Thanks, I really enjoyed reading it.
No comments posted.
Loading...
Subscribe
RSS
Recent Posts
Old Car City A Day Trip to Cartersville
Keywords
nostalgia vintage car Old Car City abandoned cars abandoned trucks abandoned vehicles junkyard vintage truck Cartersville Coca-Cola
Archive
January February March April May June July August September October November December
@ Jennifer Wall Photography
Powered by ZENFOLIO User Agreement
Cancel
Continue